The Justification of The Public Enemy (1931) as a Gangster Film


~ Introduction One of the earliest gangster movies in America is The Public Enemy. The movie serves as a good example of classical gangster film since it artfully portrays the genre. The movie was produced in the year 1931 and directed by Well...Read More

~ Introduction One of the earliest gangster mov... 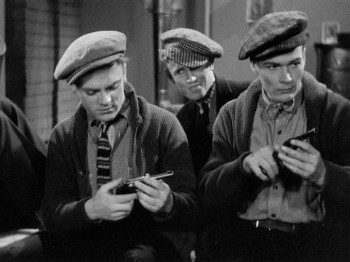 One of the earliest gangster movies in America is The Public Enemy. The movie serves as a good example of classical gangster film since it artfully portrays the genre. The movie was produced in the year 1931 and directed by Wellman William. It stands out as a landmark production of its time. This paper explores the achievement of this film in observation of the conventions of its genre as well as the historical and social context.

Features Of The Gangster Movies.

The gangster film genre is a genre that converges upon criminal actions such as bank robbery, exposure of hoodlums and petty theft. It also depicts characters acting out of the law and engaging in actions that endanger the safety of human life. These films depict criminals who engage in crime in search of wealth and power (Lam).  They also track the rise and fall of the criminal characters.  The criminals may rise to a very high lifestyle and then ironically depicts the end of their ill-fated lives or businesses. Sometimes the criminals are shown as both heroes and criminals with a tragic ending of their lives. In this genre, the characters are also depicted as immoral, psychopathic, self-indulging, womanizing, and greedy.  They also involve themselves in heated competitions with other rival gangs (Spina).

Codes and conventions of gangster films

Gangster films follow a set of codes and conventions. Film codes are usually the signs that are used to bring out the meaning. They can be divided into either symbolic codes or technical codes. Conventions, on the other hand, are the accepted and universal ways of producing a film. The following are some of the gangster film conventions and the way they are portrayed in the film The Public Enemy (1931)

A gangster film must depict the criminal characters as ruthless and who engage in constant violence. In this movie, there are many scenes in which this theme is portrayed throughout the movie. At first, the main character Tom Powers is and his Friend Matt are shown as mischievous boys where Tom plays sadistic tricks on neighborhood girl (Matt’s sister), who is roller skating. (00:05:27). Tom is also seen in a violent act aimed at ending his relationship with Kitty. He violently pushes grapefruit into Kitty’s face to emotionally and physically hurt her. (00:44:03). In another chilling scene, Tom buys a horse (Rajah) after the death of his boss Nathan and then heartlessly kills it to avenge the death of Nathan (01:03:04).

For gangsters to be depicted as scaring, dangerous weapons must be present. The weapons are used to help the criminals execute their criminal activities without fear. In this film, there is the presence of guns which the criminals are using in their theft and robbery deals. For instance, Putty Nose is seen with a group of young thugs in his room. Among the thugs are Tommy and Matt to whom Putty Nose presents guns as a Christmas gift (00:09:55).

Gangster films are also characterized by gangs. In most cases, there are rival gangs with a great extent of rivalry. In this film, we see Tom’s childhood friend and a partner in crime being gunned down by the rival gang. (1:11:24). Tommy also seeks vengeance against the rival gang for killing his friend.

Gangster films are also centered on death themes, betrayal and revenge.  The first death in this film is seen during the robbery at Northwestern Fur Trading Company. The shaky gunshots made by Tommy after being scared by a bear’s head inside the store alerts a policeman, who guns down one of the thieves. (00:14:11) We also see Tommy murdering his former boss Putty Nose in cold blood (00:55:06).

Gangster films involve a lot of money exchanges. This shows that the main concern of the gangsters is getting money. The gangster also lives expensive lives and wear expensive suits depicting greed and power. For instance, we see Matt and Tommy getting a share of cash after selling the stolen liquor (00:28:19). From this moment, they start to live lavishly and dressing expensively.

The economic and social context of the movie

The birth of gangster films emerged in the silent historical era. This term gangster was used in the 1890s alluding to the politicians, which later was used to refer to the criminals in the following centuries. By the time this movie was being produced, the Americans had already experienced what came to be called the great depression. This is a period in which the world experienced a great economic crisis, and which affected America greatly. This period was characterized by the closing of banks people going jobless and hungry. People also lost trust in the government. This is because the system imposed prohibitions which paved way for most of the gangsters to get money.  This made the gangsters tragic heroes. During this period, the gangsters would lead a glamorous life with nice dressings and extravagant lifestyles.

This movie was very fascinating to the audiences in this period since it depicted the reality and a whole lot of the gangsters who lived extravagantly despite the rest of the people struggling for survival. The truth about the gangsters who existed in America in the 1920s and 1930s contributed greatly to the rise of the gangster film mythology.  In this film, we see the prohibition of beer in ‘1920’. On the eve to the prohibition, we can see the window of the Family Liquor Store being painted “Owing to Prohibition, Our Entire Stock Must Be Sold Before Midnight.” (00:24:21)

Following this prohibition, Paddy is seen at his bar counter suggesting to Tommy and Matt that the prohibition of beer is an opportunity for the illegal bootleggers to make multi-million dollars. (00:25:10) Paddy wants the two to figure out how to steal the liquor impounded by the government.  They eventually manage to steal the liquor by emptying the barrels into their gasoline tank. (00:26:59). After this, the two young men acquire a substantial amount and head to a tailor to have smart looking outfits. They had a taste of the good life (00:29:04).

The classical gangster films depict characters that not in conflict with their milieu, police or the society but rather it is a conflict within the gangsters themselves. The conflict is between contradictory forces within an individual (Scharz, 99).

In conclusion, The Public Enemy serves as a good example of the classic gangster films which represents the genre in a very special way.  The movie incorporates the conventions of its genre to bring out the meaning of this genre in classical times.