Academic tools have evolved way farther in the present era with awesome new applications for students to employ in their studies. The Academia with its early history had simple tools to pursue simple education but advances in education led to adva...Read More

Academic tools have evolved way farther in the pre... 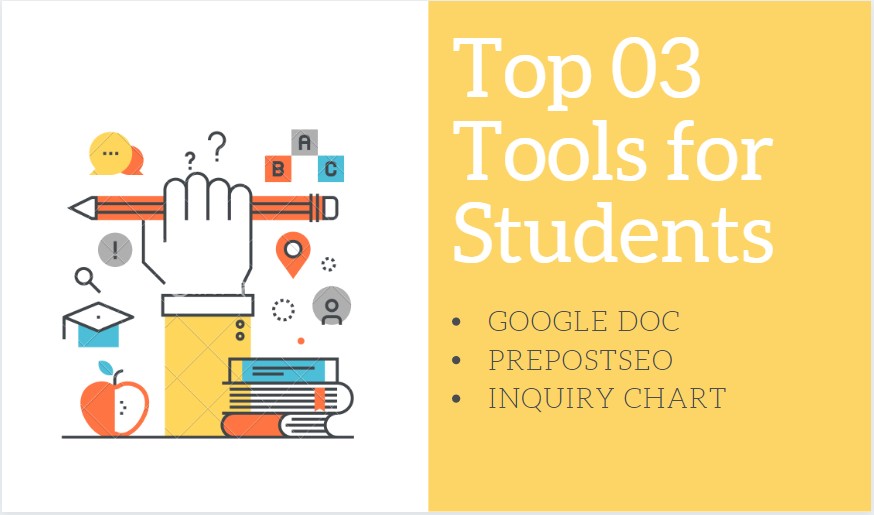 Academic tools have evolved way farther in the present era with awesome new applications for students to employ in their studies. The Academia with its early history had simple tools to pursue simple education but advances in education led to advancements in the tools/applications that are used for its pursuit.

There are many IT tools that are specifically designed with students in mind but the top three of these tools have been discussed here including Google Docs, Prepostseo Plagiarism Checker and Inquiry Chart.

Google Docs is a web based word processor developed by Google LLC and available as an application on Web on Android, iOS, Windows and Blackberry. The application comes packaged with many attractive features which makes it one of the top tools for students.

·         It is very useful for students especially in group assignments where a single assignment has to be submitted by a group of students.

·         It also allows the collaborating users to view character by character change in the text in case one of the users is editing the document.

·         The original and edited versions are saved in Google’s servers in case for further edits or a roll back.

·         Each user/collaborator/editor is assigned a specific color so they can be identified by other users while they’re making edits.

·         An additional feature happens to be a chat bar where users/collaborators/editors can interact and coordinate and discuss with each other.

·         A user can also import the file to their local computer from the online network for individual tasks.

·         Google Docs consists of “ADD ON” feature which allows individual developers to add new tools for the Google Docs.

·         Google Docs also includes the option of “Commenting Access” which only allows some users to suggest edits rather than be able to edit the document themselves for example in a local network of students creating a group project on Google Docs, deciding among themselves the designations of editors and commentators if they think that not everyone in the group should be able to edit the document for reasons of expertise or grammatical issues.

·         Google Docs was given a new feature through the use of machine learning. The feature is called “Explore” an ingrained search engine that only displays the relevant results based on the document’s text for information gathering. Document texts can also be marked specifically for Explore to zero in on specification of required information.

Plagiarism refers to intended or unintended copying of someone else’s content and presenting it as one’s own. Plagiarism particularly in academia is mostly limited to student assignments, report writing and research papers. If caught, plagiarism can have very bad consequences from loss of credibility to dismissal of a student’s work or even legal action.

·       The Prepostseo’s Plagiarism Checker has arguably the best user interface. It is a cut to the chase tool that doesn’t have layers or instructions, redirections and other nuisances like these. It is very user friendly with very easy to understand one step process.

·        It is a free and easily accessible tool especially considering that students could potentially be on a low budget but that it should not stop them from using this tool.

·       Considering the newfound online security concerns due to data theft and privacy compromise, the Prepostseo’s Plagiarism Checker was designed to be safe and secure for its users. The tool doesn’t store any of user’s content in its database, encrypts each sentence of a user’s written content when comparing it to online data to detect plagiarism and doesn’t share user’s content with any third party.

·       The Prepostseo Plagiarism Checker breaks down its user’s written content in individual sentences and compares it vast data available on the indexes of various search engines to check and detect any possible plagiarism in its user’s content in real time.

·       It marks plagiarized and unique work in its users’ content by different colors red is for plagiarism and green is for uniqueness to help users decipher the result.

·       Additionally, it also highlights any possible grammatical mistakes in its users’ written content along with detecting plagiarism. In a nutshell, it allows its user to hit two birds with one stone.

Inquiry Chart is a strategy chart for study in which prior knowledge about the topic of assignment is gathered from a variety of sources and integrated as a reference point for the topic.

Inquiry Chart (I-Chart) is used to promote critical thinking among students and the I-Chart project can be done by as few as two students to as many as an entire class.

·       The first part of the inquiry chart strategy is to always construct the I-Chart either physically or online manually or in an online tool already designated for Inquiry Chart strategy.

·       The second step for students is to find or decide among their selves, the topic or subject of their Inquiry Chart.

·       After the topic has been decided, the group of students will have to form questions regarding the topic and collect the material needed for research.

·       The fourth feature of I-Chart tool strategy is exploring the prior knowledge about the subject through various means: books, news articles, Internet.

·       The Fifth part is the discussing of this prior knowledge among their selves to evaluate it and find new ideas about the subject based on their data.

·       The sixth part strategy is summarizing and evaluating the findings of their I-Chart and to ready it for presentation.