Reasons for Hamlets Delay to Revenge | My Paper Hub

Reasons for Hamlets Delay to Revenge


The play Hamlet by William Shakespeare depicts the theme of revenge in a very wide and clear manner. Different characters throughout the play show actions and movements aimed at revenge on each other. Hamlet in this play is expected to revenge ag...Read More 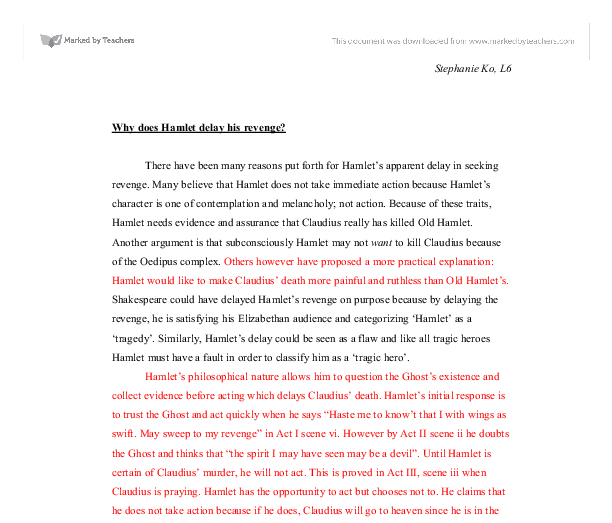 The play Hamlet by William Shakespeare depicts the theme of revenge in a very wide and clear manner. Different characters throughout the play show actions and movements aimed at revenge on each other. Hamlet in this play is expected to revenge against his uncle Claudius who killed Hamlet’s father to take the throne and remarry Hamlet’s mother. Apparently, Hamlet delays for a long time the action to kill Claudius. The playwright technically uses this delay to create more drama and sustain the play. This is because were it not for hamlet’s hesitation to seek revenge, the play would not be there. The cause of this delay could have been caused by several factors. This paper discusses some of the reasons why Hamlet delayed the killing of Claudius.

Many critics of the play have tried to find an explanation for this delay. Most of them connect Hamlet’s hesitation to psychological reasons such as fear, uncertainty, and depression among others. However, the critics have not been able to come up with a reason that is universally accepted. According to Shaw (2002), depression could be one of the reasons for the delay. Though according to this critic, it is hard to accord a clinical diagnosis since the character Hamlet is just an imagined character. However, there are signs of depression in his actions. Hamlet appears to be suffering from a depressive illness whose signs include reduced energy, anhedonia, low mood, negative beliefs; this is evident when Hamlet refers to himself as melancholic.

Hamlet has not fully accepted the fact that he has lost his father. This is another factor that really disturbs hamlet and causes his delay to act. This is one of the reasons he feigns to madness, showing his grief and mourning the death of his father. This leads to him suffering the inability to love, losing interest in worldly matters, lowering his feelings on self-regard, painful objections as well as expectations of punishment (Cameron, 2014).

According to Eileen Cameron (2014), Hamlet is seen going through the inner struggles within himself. Though it is clear that Hamlet has feelings of hostility and hatred against his uncle Claudius and the ghost of his father further compels him to kill Claudius, there is evidence of unconscious conflicts as well as the loyalty to his own father. In Hamlet’s case, there is a conflict between evil and good based on a moral standpoint. Though it was morally offensive for Claudius to kill King Hamlet in order to take his throne and his wife, for Hamlet, it was not morally upright to kill him for revenge. The logic thinking and for Hamlet are also simultaneously disrupted by the appearance of the ghost. This also distorts his thoughts about Claudius.

Uncertainty is another cause of Hamlet's hesitation to kill his uncle. Although the ghost of his father has revealed to him that Claudius was responsible for the death of King Hamlet, Hamlet is privately cynical about the reliability of the ghost. Hamlet is also shown as a very skeptical and meditative character who always thinks before acting. This notably explains why he must wait until he is sure that Claudius actually killed his father before he can act on him. He, therefore, must wait until he has evidence and assurance on the killing of his father. It is also argued that Hamlet delayed the revenge because he wanted to make Claudius’ death very painful and ruthless, causing him to always postpone it. ("Essay Examples: Why Hamlet Delays in Avenging his Father's Death", n.d.)

Another reason why Hamlet could have delayed revenging for his father is the unfortunate fact that he possessed some intellectual, psychological or emotional flaw. This causes failure to act without delay. To regain the status quo, Hamlet had a legitimate duty to revenge the killing of his father. Considering the fact that Claudius was sovereign, the only option that Hamlet was left with was to take the law into his hands and kill Claudius.  However, his reluctance was also restrained by the desire for Gertrude, his mother. By killing Claudius, who is now the new lover for his mother, he would exterminate the image of his secretive Oedipal self. This would also be a very wild justice (Ryan, 2016).

In conclusion, though Hamlet finally succeeds to kill Claudius, he does so in a manner that suggests that he had not planned to do it at the moment. This shows that Hamlet had failed to accomplish his role of being a loyal avenging son which seems forgotten for him. However, his failure can be seen to be caused by so many forces acting against him.